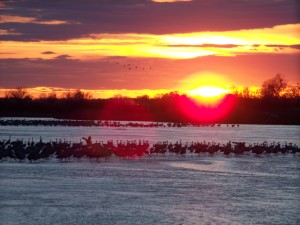 For 6 weeks, late February to early April, something magical happens in the heart of Nebraska. More than 80 percent of the world’s population of Sandhill Cranes converge on Nebraska’s Platte River. The Sandhill Cranes travel from southern wintering  grounds to northern breeding grounds in Canada, Alaska and Siberia.  They stop along the Platte to rest and gain body fat as they prepare for their journey. Fossils of wing bones dating back to nine million years have been discovered in Nebraska. Whooping cranes, eagles, ducks, geese and shorebirds are among the other wildlife that migrate through central Nebraska during February and March. It’s an amazing sight and one that can only be truly appreciated in person!

The Cass, Crawford, and Shelby County Conservation Boards are offering a guided tour out to Kearney, Nebraska April 3-4. We will be taking a Windstar bus. We will make stops at the Great Platte River Road Archway Monument, Rowe Sanctuary (to view the cranes), Nebraska Nature and Visitor Center and lots of other opportunities for bird viewing. The cost for the trip is $185 includes: transportation, lodging, entrance fee for Archway, Nature Center, and Crane blind fee at Rowe Sanctuary. Does not include meals. If you have any questions about trip or would like more information please call Lora at (712) 769-2372 or email [email protected] . Informational programs will be held: February 15th 7PM at the Anita Public Library, and February 16th 6PM at the Rock Island Depot (Chamber)Atlantic. Deposit Deadline is February 19th. 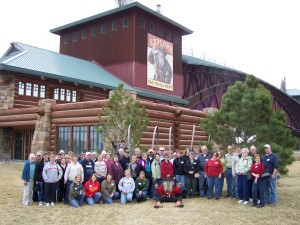